Tanzanite. Discovered in the 1960s and named after Tanzania by Tiffany & Co. the famous jewellery company who declared it to be the most beautiful stone discovered in the last 2,000 years. However with a very limited supply it is entirely likely that this generation will be the last one able to buy stones from the primary market before the supply is exhausted. What does the future hold for this rare and beautiful gemstone?

Tanzanite is connected with the empire of the angels, masters and spiritual guides. This beautiful lavender blue gemstones is a guid by inner journeys.

Tanzanite is the blue/violet variety of the mineral zoisite part of the epidote group. It was discovered in the Mererani Hills in Tanzania in 1967, close to the city of Arusha and Mount Kilimanjaro.

In 2002, the American Gem Trade Association chose Tanzanite as a December birthstone, the first change to their birthstone list since 1912. 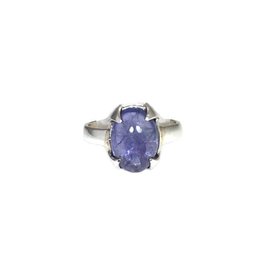 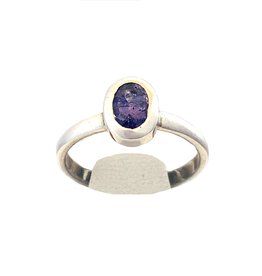 Beautiful cabochon cut tanzanite stud earrings from our Kiliaan Collection, the tanzanite is a round cut.
Add to cart
Earrings tanzanite studs, round €95,00